THE TRADITION LIVES ON!!


Frank Bell once again hosts his annual celebration of having survived a near fatal bout of Crohn's Disease instead of succumbing to it and thus not being here now to celebrate it!! Each year on this horrific yet victorious anniversary he parties with his two favorite Denver bands, Little Fyodor and Ralph Gean, plus two more of exceptional caliber, plus offers a HOT DOG AND DONUT BUFFET and accepts donations to the Crohn's and Colitis Foundation of America!!!


This year he is ALSO having an artsy type produce a HIGHLY COLLECTIBLE Jack Chick-style tract telling the story of Franksgiving that he will distribute bountifully among the faithful and faithless alike!!!

So come join the party, git down to the funky sounds, gorge yourselves on delectable delicacies and overall astound yourselves to the awe inspiring extravaganza that is -- FRANKSGIVING 2015!!!!

Ralph Gean, BTW, is an old time rockabilly cat who cut sides in the early sixties and still plays his joyful and sincere heart out with his acoustic balanced on his belly!! Check him out at http://www.ralphgean.com/

The Inactivists are long-time progenitors of eclectic, progressive, wacky, zippy, darkly, sickly humorous rock and whatever else it might get called!!

Suzi HomewreKer is a sweet, tart and saucy power pop punk rock goddess who'd be playing stadiums were there any justice!!! https://www.youtube.com/watch?v=9qQt2m-Q-XA

Little Fyodor will be playing our first gig since our BIG 7 inch EP release show, and hey, some slabs of Truly Rejected vinyl and the accompanying Mar Williams designed t-shirts are still available.... (Fair Warning: this will be the Little Fyodor trio sans Babushka who will be away on special assignment!!) http://littlefyodor.bandcamp.com/ 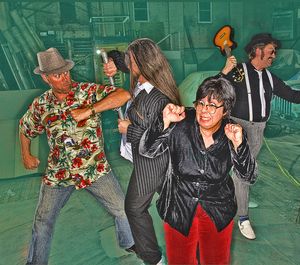